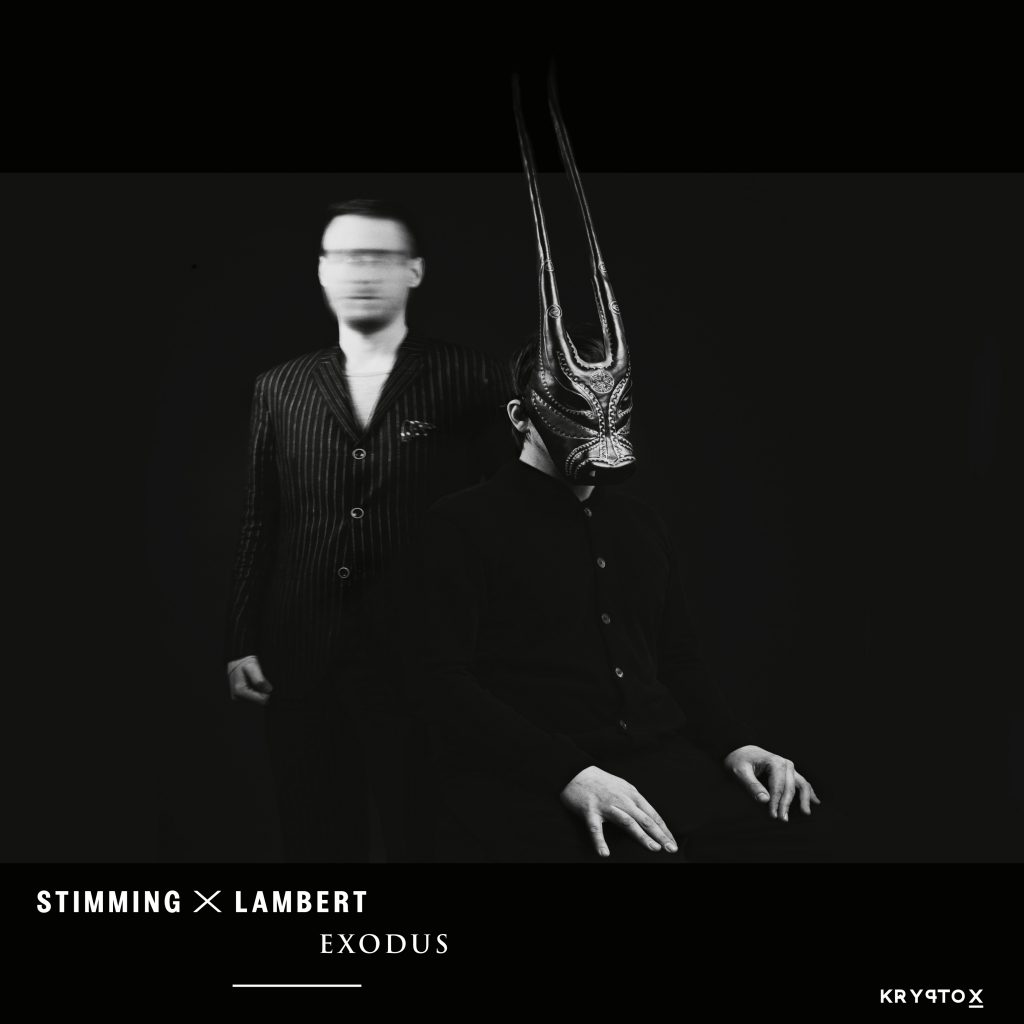 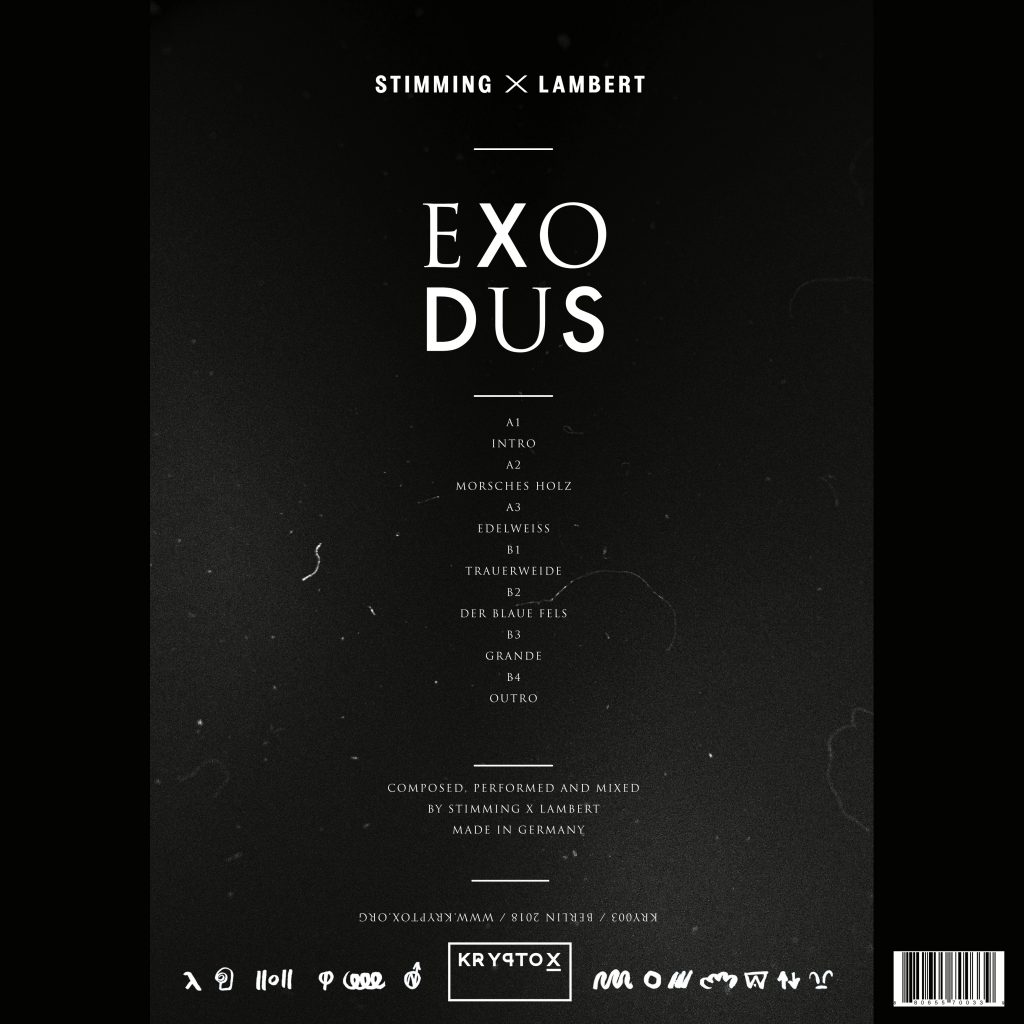 Stimming & Lambert have done an album together!
Their duo debut album EXODUS will be released on the new Kryptox label from Berlin on 9th
March 2018.
Kryptox is the new sublabel of Gomma records for Neo -Jazz/Kraut/Classical and Ambient music.
A first pre-release single by Stimming x Lambert has been released on the Displaced Soundtracks
compilation of Life & Death records in november 2017.

Now, on his new imprint Kryptox the first album collaboration of Stimming & Lambert will see
the light.

Stimming & Lambert are very unique artists, who coin the soundtrack of their times by not only
quoting their past. Both mix classics with postmodernism, the unexpected with the longestablished
– in order to create something that fills our needs in a very surprising way: getting
excited about very new and astonishing tones while feeling at home with sounds we never really
knew we liked. Both artists come from a classic background, studied their instruments from the
peak. But whereas Lambert sticks to his piano, stays plain with this diversity of romantic, minimal
opulence, Stimming mixes digital sounds with field recordings, the rattling of a coffee machine
with 18th century music.
All this combined on stage makes it even more exciting – the man with the mask who is not Daft
Punk (at all) and the minimal composer, who is not (only) an international House Liveact.

Martin Stimming – a composer who creates tracks like a singer songwriter with the attitude of a
90s minimal electro DJ: drifty and impulsive, but with a deep sense and feeling as though writing
a poem, that is read only once, but unforgettable. He appeared on the very first Diynamic
Record and established his name in a ten year lasting relationship with solomun’s label.
But his starts was different: He played the violin, piano and drums at the age of 10. Aged 16, he
began producing music with a computer and started realizing that this would be his path. His
own breakthrough hit, 2008’s “Una Pena” and the following debut album “Reflections” (label:
Diynamic Music) got him loads of fame in the scene. Stimming was one of the first artists to
connect techno ideas with symphonic music. Between his second and third album he hired the
Brandenburgisches Staatsorchester to replay his track „November Morning“ as a classic orchestra
piece. Whereas Lambert seeked the dark for composing, Stimming produced his 4th album
‚Alpe Lusia’ in a secluded alpine hut in Northern Italy – before packing his bags again, performing
all around the globe.

Lambert – the German pianoman with the mask, who caresses the piano for the perfect lullaby of
our times: homey and cosy, edgy and exciting at the same time, with a depth of sound and an
ease of melody that we are all searching for.
As a teenager Lambert played drums in a few garage bands. After getting bored of loud sounds,
he finally decided to change to an more quite instrument: the piano. Before the release of his solo
debut Berlin-based Lambert has already attracted attention in the background – with his minimal
revisions for bands like Moderat, David August, José Gonzáles, Nine Persson, David Bowie and
many more.
His first album “Lambert” was released in 2014 on the Berlin label Staatsakt, was mixed and
mastered by Nils Frahm and surprised with musical aesthetics that is second to none. In 2015
Lambert caused even more sensation with “Stay in the Dark“, an homage to the very special nocturnal
Berlin atmosphere, composed only at night-time. 2017 it was time for his third album
„Sweet Apocalypse“ on Mercury KX. In addition to his unique sound, there is the very entertaining
speculation about the identity of the man behind the mask and his mysterious appearance
combined.
By now Lambert is a worldwide touring artists. Selling out big venues in London, Paris or Hamburg
in just a few days. Creating hugh amouts of Plays on Spotify and becoming one of the big
names in the new contemporary-classical piano scene.

About the album – in the artists’ own words:

Lambert:
One day I saw a documentary about Stimming in which he said: „Perfection is for idiots“. I don’t
think music by idiots necessarly is bad, but I wasn’t sure if this statement was just an attitude, a
description of the creative process or simply an honest self-criticism. But I knew instantly: I can
apply this statement to my own music and life. So I wrote him a mail and he invited my to his
studio.
We started to improvise and decided to send each other ideas and see what becomes of it. I sent
him piano sketches, but also guitar and string stuff. Later I made noises on the wood of my piano
and built beats out of these sounds. Martin was touring in Asia at that time and he started to
transform my footage into something new in his laptop. Anytime I received mail from him I was
so curious to hear what he made, to see where something was added or cut. As I can’t sing but
wanted a voice in these tunes I recorded a simple „Uh“ and built an choir out if it.

Stimming:
I did most of this production while touring in Asia last year. In an 8 square-meter hotel room in
Osaka. On the surface tablet with my Elektron instruments (Rytm & Octatrack). My idea was to
combine the kind of grooves from my Liquorice album with the amazing beautiful melodies and
harmonies that Lambert was sending me. I always thought: If i would be able to play piano on a
high level – i would love to make the music Lambert is doing.