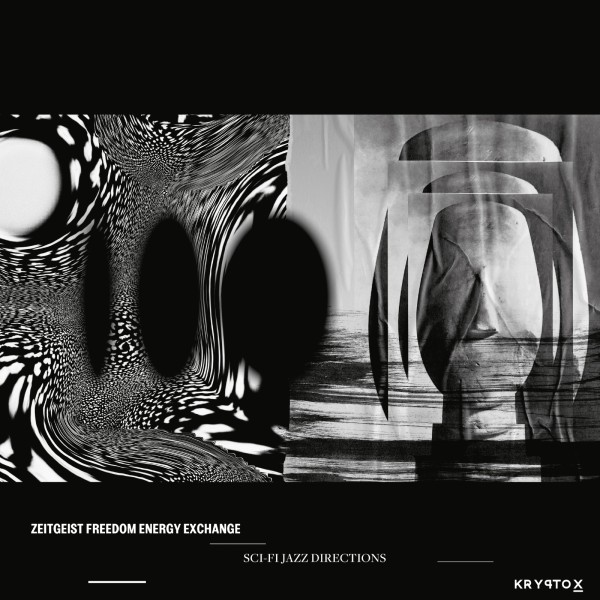 Berlin has become famous for being the Techno capital, but since a couple of years there are many other music things happening in the city. New subgenres are growing, new clubs and scene are building. It’s becoming the place to go of all kind of new musicians in the jazz, psychedelic and other music scene. And Kryptox wants to show all these new phenomenas. After the albums of Berlin based Greek harpist Sissi Rada (Co-produced by Brian Eno), the kraut-rock collective Spiritczualic Enhancement Center and experimental drummer Niklas Wandt – now its time for Zeitgeist Freedom Energy Exchange.

The band around Melbourne born drummer and producer Ziggy Zeitgeist has been based in London for a certain time before moving to Berlin a few year ago. By now Ziggy and his crew has a big following in Berlin – where the new jazz and soul-infected dance scene is growing – many new spaces, clubs, radios and places where the new DJs, musicians and bands things happen.
Zeitgeist Freedom Energy Exchange is a collective that bring together the real UK jazzfunk vibes that have been popularized by Kamaal Williams, Shabaka, Ezra Collective with the energy of Berlin’s electronic DJ music. In fact Ziggy Zeitgeist, head of the collective is a big fan of the straight dancefloor driven DJ tools music. His aim is to create a mix of both – the jazz vibes and the tribalistic, electronic energy to create a way of real dancefloor jazz vibes that reflect ta fresh modern touch od what could be a sound for the next years. Of course many elements of FZEE songs come from the 1970ies. The chord progressions, the fusion keyboard solos, the driving rhythms. But the general sound if the music and its straight electrifying energy to create a completely own futuristic sound.

Sci-Fi Jazz Directions was recorded by the original trio of Ziggy Zeitgeist, Matthew Hayes and Lewis Moody. After spending thousands of hours together making music on stage and in the woodshed, this album represents a turning point for the group and quite possibly the very nature of creative collaboration.

This is an album of tunes crafted over ‘online jam sessions’, as the trio were split between three corners of the world during 2020. Ziggy explains: “Our blessing and our curse is that we’re adaptive creatures, we find a way, we adapt to the circumstance, and so as artists and as improvisers we found ways to connect and create in a virtual space.”

The trio continue to hone their unique brand of dance-floor focused ‘jazz-rave’. They are mainly live musicians and they love to play at parties. They’ve been playing underground dance jam in abandoned basements of London, Berlin, and Melbourne for years – and its bog part of their identity as that the magic of live bands: the band needs the direct interaction with the dance floor.

This album epitomizes the Zeitgeist of the time, the crucial meeting point of our organic selves with our technology.